Skip to content
Previous Next
Who needs community opera? – Part Three: It could be a model of international collaboration

Part Three: It could be a model of international collaboration 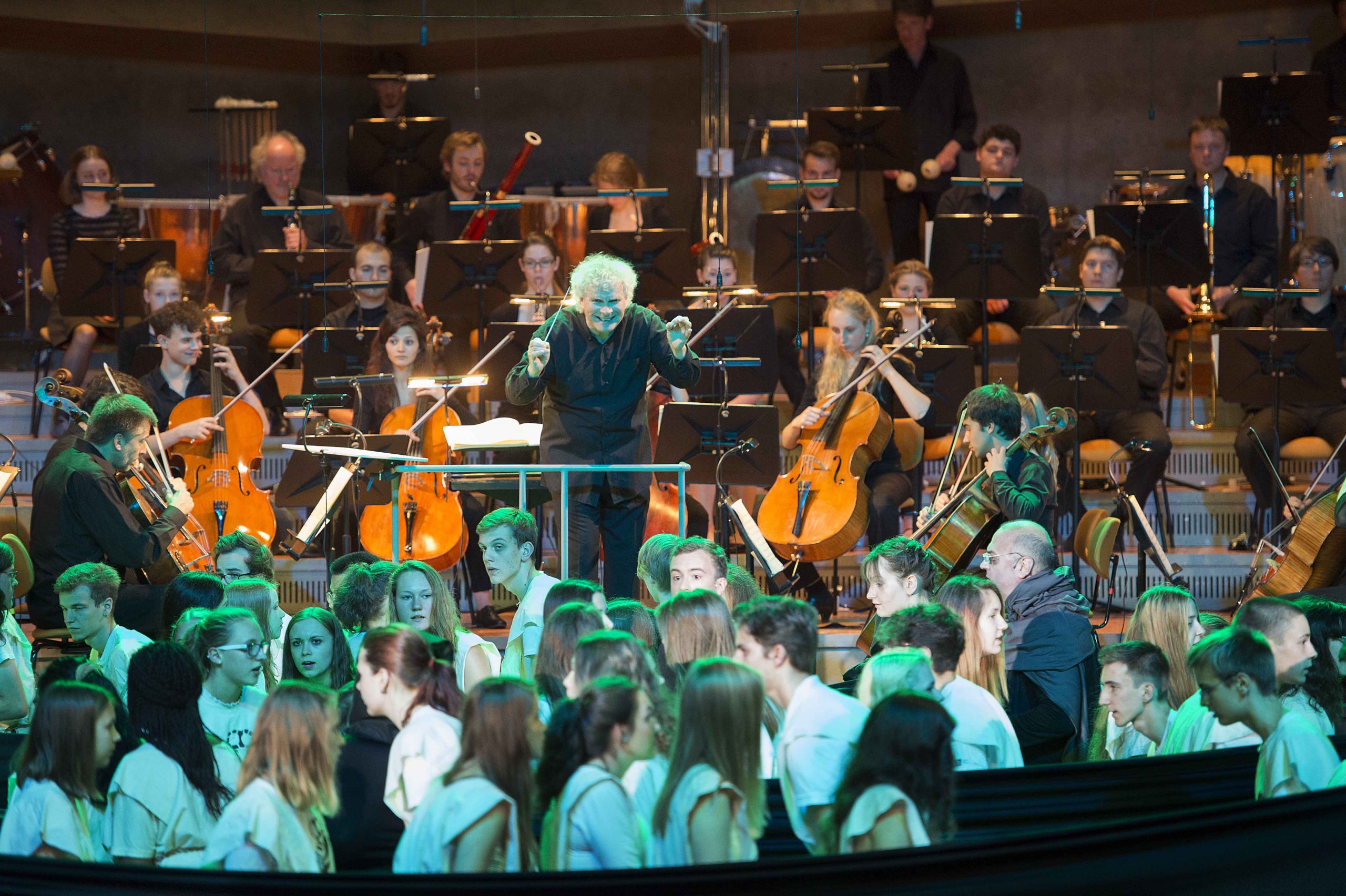 Jonathan Dove, The Monster in the Maze, 2015
production by the Berlin Philharmonic, photograph by Monika Rittershaus,
courtesy of Stiftung Berliner Philharmoniker

I sometimes ruefully observe that, whatever I do, Benjamin Britten got there first and did it better: mainstage opera, television opera, church opera, children’s opera, community opera. But he didn’t live to see the internet – here was my opportunity to do something first!

Britten also didn’t explicitly write climate change operas, although you could make that claim for Noye’s Fludde. Like that ur-community opera, my first attempts to write operas about climate change had taken an allegorical approach: Adam and Eve leaving the Garden of Eden (The Walk from the Garden, 2012); Phaeton, losing control of the chariot of the sun and causing the earth to heat up (The Day After, 2015). But eventually it dawned on me that a much more direct approach would be to write about climate refugees, people with dramatic personal experiences that could be sung.

Climate migrants’ stories involve whole communities, so it should be some kind of community opera. But their predicament is an international problem, so the opera should somehow involve communities from more than one country. Perhaps communities from different countries – on three continents, say – could be linked simultaneously in a networked performance, using the internet and big screens, so that in each place an audience would experience a large group performing live, interacting with groups in two other countries appearing on screen. It could be a model of international collaboration, setting a good example of the vastly more complex international collaboration needed to tackle climate change.

I developed this idea with the Young Vic Theatre and Somerset House. We settled on Rio de Janeiro and Cape Town as locations on different continents where the time zones were not too far apart for a networked performance at a reasonable time, and a stable internet connection could be achieved. We met extraordinary musicians in Rio and Cape Town, and found partner organisations to co-produce.

An obvious musical challenge was going to be the latency, or delay, inherent in any audio-visual exchange that uses the internet. In a networked performance where the audience is in one place, this can be compensated for, but with a live audience in each location, the delay needed somehow to be integrated into the composition. With an ambient kind of music, or where there is no clear pulse, it wouldn’t really matter; but I also wanted to be able to write fast, energetic, dramatic music. We made some experiments, simulating the effect of latency by purposely introducing varying delays into the wired connections between musicians in different rooms. At certain speeds, it was possible to improvise satisfying music, so long as the musical pulse was equal to the delay. I realised that if I could be certain that the delay would consistently be, say, half a second, I could incorporate this into the score by using a metronome-mark of 120bpm. The piece would sound different in each location, but could still be exciting. So there seemed to be a way forward.

We knew there were many technical hurdles to overcome. Would we be able to achieve a perfect synchronisation between the singing and the lips on screen? The big screens themselves would have their own delay – another element to factor in somehow. Without perfect sync, the feeling of communication would dissipate.

Many minds were brought to bear on all the questions the project threw up. With conductor Brad Cohen and director Penny Woolcock I stood in potential locations in Cape Town wondering: how will the audience know the performance is really happening right now in those other two countries? How will they know it hasn’t all been pre-recorded? How will they know those other performers are really in London and Rio?

We started to imagine a pre-show element where, for instance, the audience in Rio could ask questions of the audiences in London and Cape Town, and also – with roving cameras – be taken outside the performance venue to see distinctive iconic locations in those cities. Look! You can see the London Eye!

Because we could imagine it so vividly, it did not occur to us that we would be unable to realise this dream. Technical conversations with experts such as Alain Renaud challenged our understanding, but always felt illuminating and optimistic. So it was baffling and frustrating that our attempts at simple networked improvisations between singers and instrumentalists in our three chosen cities kept stumbling over technical obstacles.

Eventually, we had to admit that sending large amounts of visual and audio information continually, in all directions, between performers on three continents, to enable a networked performance, made impossible demands of the software then available. Our producer called a pause:

‘Technical advisors in four countries have confirmed that sung music which is visually synchronised between three international nodes is the most challenging demand that one can make of a network… No one has developed the technology to achieve a suitable visual and musical performance over great distance… Precise replication of the technical, producing and artistic capacities at each node is needed.’

Our investigations and experiments ran from 2010 to 2015. I wonder if anyone has yet achieved what we were trying to do?

Linking communities across the continents was a beautiful dream. Making connections is the great strength of community opera. An arts organisation connects to its community, celebrating and giving status to the communal achievement. Composers connect to their community, harnessing their imagination to create roles for the widest range of abilities. And at the heart of it all, the community performers connect to each other, to the professional participants, and to the wider audience, who share their joy, and feel the wonder of seeing people they know transformed by the act of singing and acting out a potent story.

It’s hard to say who needs community opera most: the organisations, the writers, the participants or the audience. But if you’ve ever witnessed the curtain-calls after a community opera, you’ll know that everyone needs it.

2012 The Walk from the Garden, Salisbury Festival

The Monster in the Maze, Berlin Philharmonic (semi-staged) here:

The Making of The Monster in the Maze, LSO Documentary

Toggle Sliding Bar Area
The cookies on this website are used to personalize content and advertisements, offer social media features and analyze traffic. In addition, we share information about your use of the website with our social media, advertising and web analytics partners, who can combine it with other information that you have provided to them or that they have collected from your use of their services. More informationACCEPT
Privacy & Cookies Policy