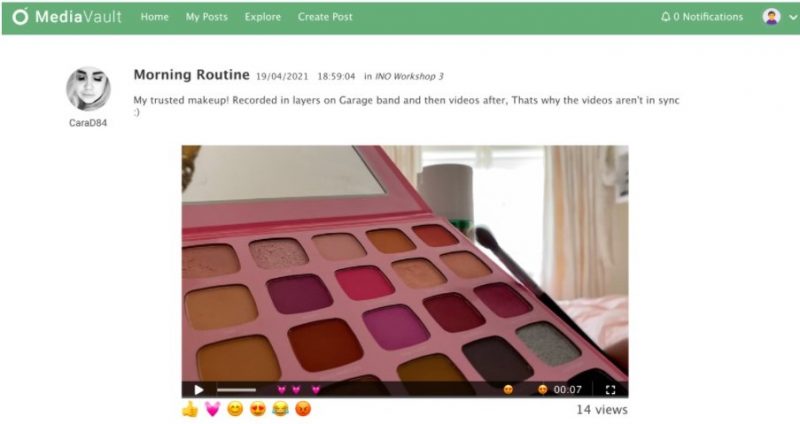 A song by an open pilot participant made entirely from sounds created by objects, uploaded to the Co-creation Space, formerly known as the ‘Mediavault’.

Opera as an art form spans several centuries of culture and language. While rich in tradition, contemporary opera companies struggle to convey their relevance to modern audiences, and to overcome preconceptions of the form as overly expensive, stuffy, and unwelcoming. A main goal of the TRACTION project is to foster social transformation from inequality, using technology to help diverse communities across the European Union consume and participate in the creation of the art form.

The project comprises three trials; INO (Irish National Opera), SAMP (Sociedade Artística Musical dos Pousos), and LICEU (Gran Teatre Del Liceu). Based in Dublin, the goal of the INO trial is to use new technology and novel audio-visual formats to create a new digital community opera in Ireland. LICEU, which is based in Barcelona, concerts a creative collaboration between migrants from different cultures in the Raval neighborhood and opera professionals at LICEU opera in order to train them in creative skills for future employment. SAMP, a community project with young inmates in Leiria, Portugal, likewise aims to engage prisoners in an opera co-creation process in order to improve the quality of their lives and future prospects.

Working with communities that are new to an organisation is inherently challenging when done remotely, especially when trying to create an opera from scratch. Cups of tea and informal chit-chat are cut out, leaving simply a process and time delay to work with. It would be foolish to attempt to recreate a traditional in-person workshop in a digital space, like some kind of period performance. To support digital co-creation, The TRACTION project searched for new approaches and tools to support co-creation that work well in a digital space.

A key challenge of digital co-creation is how professionals and community members from diverse cultural, linguistic, and technological backgrounds can easily have conversations about media. To support the co-creation needs of the three trials, CWI is developing The Co-creation Space, a “private social media” that allows participants to have conversations about production content such media, costumes, and poster representations. Developed in 2020 through a user-centric approach, and validated thanks to the LICEU user tests, the tool unites the media storing, sharing, and editing capabilities of traditional social media.

To support a collaboration with communities that may have otherwise not been possible due to the COVID-19 pandemic, CWI ran a two month open pilot of the Co-creation Space with composition workshops with Irish National Opera (INO). The workshops were conducted with three Irish communities: residents of Inis Meain, adults living in Tallaght/South Dublin, and a group of secondary school students living in rural areas of Ireland. The goal of the open pilot was to deploy the Co-creation Space, gather functional requirements for large-scale deployment, and better understand the tool’s usage for co-creation activities.

One great benefit of working online is that TRACTION artists, such as composer Finola Merivale, have been able to work far more closely with communities than may have otherwise been possible. Finola ran composition workshops three times a week, remotely from her home in New York. These workshops were designed for an online setting, employing the Co-creation Space to stir conversation and collaboration between participants.

Each session was centred around a particular composition idea, such as creating sounds with your body without singing or making instruments using household objects, that were designed to challenge workshop participants’ ideas about what composition can entail and the ideas they leads to. Finola contextualised her workshop theme by sharing pieces that played on some of these ideas. One such example is the following piece used in the workshop on body sounds.

As part of the workshop, Finola prompted participants to create their own short piece or musical idea that participants captured on their phones, a process that generated a huge amount of material. Rather than using tools like email or WhatsApp, workshop participants used the Co-creation Space, not only to store and discuss recordings, but also to support one another’s work, through comments and emojis.

The open pilot identified several functional requirements related to the usability of the interface, such as refining the onboarding process. Together with VicomTech, CWI is analysing the open pilot data to understand how participants interact with media, what collaboration patterns emerge, and how the co-creation of a project evolves over time. This work will produce excellent research in the domain of computer-supported cooperative work.

Complementarily, the musical creations from the open pilot will be integrated into the final opera that INO produces in 2022. Together, the TRACTION collaboration around technology is supporting a new form of opera creation that resonates with modern audiences across different demographics, cultures, and needs.